In Bible study this week, we talked about how important it is that we live in the belief that Jesus is the answer to the question “Who is God”, Jesus is the exact representation of God’s nature. I wrote the following meditation for us to do together as a conclusion to that discussion.

Think of times when you’ve struggled – either with sin, or discouragement, or even disbelief. Maybe you’re in one of those times of struggle right now. Do you see God responding to you the way Jesus responded to people in similar struggles when He was walking this earth?

To help us get our minds around Jesus as a picture of God’s character, we’re going to look at one of my favorite stories, in which I think we see many aspects of God’s character. We see that He is a healer. He is almighty. We see His loving Father-ness. We see Him bring peace, wholeness, shalom in every sense of the word.

I’m going to walk us through this story (from Luke 8). I want you to put yourself in this story, watch it in your mind’s eye, like you’re watching a movie. 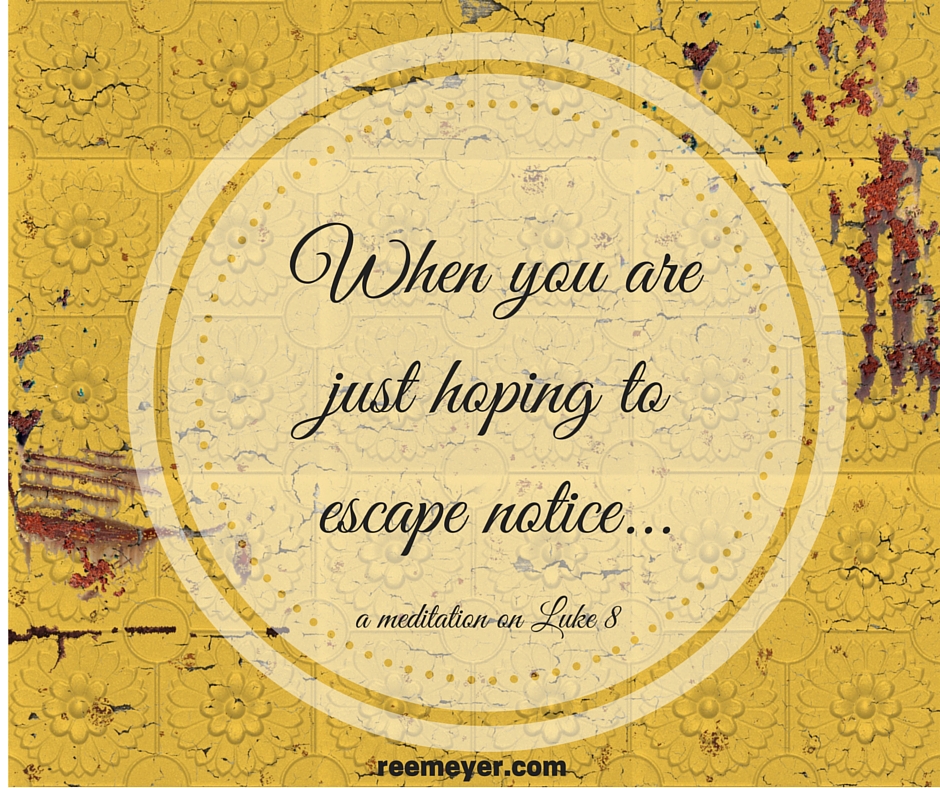 And as Jesus returned, the people welcomed Him, for they had all been waiting for Him.

An important man – a synagogue official – has asked Jesus to come with him, to heal his only daughter, who is dying. This is an important errand, helping this important man. And crowds of people are pressing around Jesus as He goes. The word there is the same word used for pressing out wine from grapes – it was a packed crowd. Can you picture that?

And a woman who had a hemorrhage for twelve years, and could not be healed by anyone, 44 came up behind Him

A hemorrhage for TWELVE years. Probably menstrual or vaginal bleeding. 12 years. In Jewish culture, that would have made her ritually unclean. Anything she touched was unclean. That probably means 12 years without physical contact. She had spent all of her money, but nothing could cure her. Can you see her in your mind?

Jesus is there. Messiah, some people say. Can He heal her? She thinks so, if she could just touch the hem of his robe.

But He is surrounded by pressing crowds. And anyone she touches becomes unclean.

So she (so bravely) wades into the crowd, perhaps praying she won’t be recognized or noticed. And she touches the fringe of the Teacher’s cloak, and immediately her hemorrhage stopped.

The Bible implies that she knew. She knew right then that she was healed. Can you picture her face? I see elation.

Jesus said, “Who is the one who touched Me?”

This would be like someone in the crowds leaving Memorial Stadium after a Husker game – someone in that crowd saying, “Who touched me?”

Peter says, “Master, the people are crowding and pressing in on You.”

As Peter and Jesus go back and forth about who touched him, what is that woman feeling? What is she thinking?

Luke tells us: “When the woman saw that she had not escaped notice…” Ah. She was so hoping to escape notice. But Jesus KNEW. He felt the power go out of Him.

She came trembling and fell down before Him, and declared in the presence of all the people the reason why she had touched Him, (she confessed her uncleanness before all those people she had made ritually unclean!) and how she had been immediately healed.

After 12 years of shame. 12 years without physical contact, without being able to participate in Jewish religious life, 12 years labeled unclean… How did it feel to be in that crowd of people, confessing what she had done, publically? Can you see her? Can you see the crowd? What are the looks on their faces as they hear about her affliction, and the terrible thing she did (TOUCHING a religious man, a teacher! Not to mention touching each of them!) See their faces – what is there? Shock? Horror? Disgust?

But now see Jesus’ face. How is He looking at her? (wait.)

No reprimand. No harsh words. He calls her DAUGHTER. And tells her to go in peace.

Can you feel what she must have felt?

Now I want you to picture yourself. Think of your greatest sin struggle. Your greatest affliction, your biggest regret. Whatever you’re most ashamed of, what you try the hardest to fix, to cover up, to hide.

Think of it as a stain, visible to everyone.

Picture yourself – so ashamed – trying to just sneak up behind God, your creator, ruler of the universe, hoping for healing and release.

See Him looking at you and seeing your sin and stain.

What is the look on His face?

Do you see your Father God looking at you as Jesus looked at the bleeding woman in Luke 8? Do you see beauty in the face of Christ?

Do you see His Love? His healing? His power?

Do you hear Him speaking peace to you?

Do you hear Him calling you daughter?

Your faith (the fact that you approached me. You trusted me. You came to me.) Your faith has made you well. Go in peace. Go in PEACE.

Living on the Rock

If you enjoyed what you've read here, please share! It helps others find the site and spreads the goodness (which makes me so happy!)

Looking for Something Specific?

I send out periodic behind the scenes thoughts, recommendations, what’s making me happy, as well as the latest posts from reemeyer.com. As I have new resources, the reemail will be the first place to hear about what’s available, so you don’t miss a thing!

Right now when you sign up, you can download a free copy of my latest devotional: NO FEAR.

In case you missed it (recent posts)

Things I talk about…