When the news is bad and life is hard, I try to look for things that bring me joy.

Right now I’m finding joy in finally fall-ish weather, boys who are not too old to want hugs and kisses from their Mama first and last thing, and a husband who makes me belly laugh.

None of those are things I can share with you, so here are some pop culture-y things that are making me happy at the moment, things you can check out and bring some joy to yourself.

Several of my close friends have been talking to me about Emily Freeman for years now. I’ve snatched up a couple of her books on sale, although they haven’t made it to the top of my reading pile yet. But when I heard she’d started a podcast, I checked it out.

Y’all, I LOVE this podcast, it’s not like anything else I listen to.

First: I love her voice. She sounds like peace.

Second: It is short, around 15 minutes.

Third: This podcast is like a deep breath in the middle of my week. I wish I could listen to her every day as I get ready, reminding me to make space for my soul, suggesting questions to ask myself, praying a blessing over me.

This week’s episode about specifics addresses how to care for your soul in the wake of tragedies like the shooting in Las Vegas this week. She quotes my favorite, Madeline L’Engle, and also Mr. Rogers, and she has such wisdom for this particular moment in time. 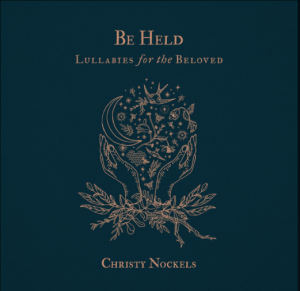 Christy Nockels’ Be Held: Lullabies for the Beloved

Christy Nockels has been singing truth over my life since the late 90s, when I heard her sing with her husband under the name Watermark at a church in College Station.

Sara Hagerty posted last month that she was talking about her book Unseen (which I loved) on Christy’s podcast, I was thrilled to both listen and also learn that Christy Nockels has a podcast – I had no idea! Then I was thrilled AGAIN to learn that Christy has new music coming out. It is a lullaby album, released last week, and I checked it out even though my kids are well beyond needing lullabies (on the other hand, they would still welcome me singing over them every night, the younger two at least. The oldest would critique my tone I am sure.)

I LOVE THIS ALBUM. It has lovely lullabies that make me wish I still had a preschooler or even baby to sing to. But it also speaks beautiful words of truth into my own heart. I’ve been listening to it in the mornings when I’m getting ready for my day and getting the kids’ breakfasts, and I love the peace it is bringing to our mornings.

It opens with the most beautiful overture (written by Nathan Nockels), which echoes throughout the rest of the songs. My favorites are “Always Remember to Never Forget”, which contains this beautiful lyric:

Always remember to never forget/ When you look in the mirror/ the answer is YES.

Yes, you are pure as gold, yes you are beautiful. So always remember to never forget…

And  “How Could I Ask for More” because it makes me cry:

The link above is to buy the album from Christy Nockels’ website, but if you’d like to check it out on Spotify (which is where I’ve been listening to it), you can do that here.

The West Wing Weekly is the first thing I listen to every Wednesday, which is my favorite podcast day as it is (have you listened to the Popcast with Knox and Jamie yet??)

They were finally able to work everyone’s schedule out to have Martin Sheen on. I adore Martin Sheen, mostly because of President Bartlet, but also because his mannerisms and expressions, something about how he carries himself in the world reminds me of my father. He also seems like a deeply thoughtful and lovely man, and it was at his request that the character he played on The West Wing was Catholic. Seeing how President Bartlet balances leadership with his faith is one of my favorite elements of The West Wing.

I loved this conversation, both about The West Wing and also about life and belief and the difference between causes and issues, and how if we care for our own well-being we need to also care for the well-being of others. (If this is interesting to you, you might also want to listen to the episode of On Being with Martin Sheen, it is so good as well.)

When things are hard, I tend to re-watch rather than try new TV shows. Knowing what is going to happen is just so much more relaxing for me. Plus I am almost always doing something else as well as watching TV (folding laundry usually.) We don’t have a DVR so if I’m watching anything it is usually on Netflix.

Periodically I try to start a new series, but I almost always give up after 1 or 2 episodes and go back to watching Parks and Rec, The West Wing, or Miss Fisher’s Murder Mysteries (Y’all, you need to CHECK OUT Miss Fisher, I love her. Speaking of things that make me happy.)

I heard from several folks I follow that The Good Place was actually quite well done, which surprised me. Kristin Bell and Ted Danson in some version of the afterlife you only get to if you accrued enough points to get in? That is wrong and also sounds extra stupid. Plus the joke that she can’t cuss so tries to drop the F bomb and just says “FORK!” seems like the kind of thing that would get old fast.

But you know what? I watched the whole first season, and it is not what I thought it was. Yes, the idea of an afterlife you earn your way into IS messed up, that is the actual point of the show (so far…the actual point is still a mystery). And I had forgotten how delightful Ted Danson can actually be, plus the rest of the cast is both diverse and AWESOME. Bonus points for Ben Wyatt/Adam Scott showing up and being TERRIBLE as the director of “The Bad Place”. Also? I laugh every time someone says “Fork this!”

It’s worth checking out, if you’re looking for a show to binge-watch (or just normal watch. Does anyone normal watch anymore, if they have the choice?) The first season is on Netflix, the second season just started on ABC.

I didn’t  realize it until I typed these all out, but the unifying element in these very different pieces of pop culture is compassion. The need for compassion and caring for others is an underlying theme in all 4 of these, even The Good Place.

I  believe we all belong to one another. In this violent, unpredictable world we can make happiness by owning that and caring for ourselves and one another.

We can also make happiness by grabbing laughter whenever we can. So I’ll leave you with this masterpiece by my genius 12 year old niece, who’s been compiling comic versions of her adventures with her cousins at Grammie’s house. This is her version of what happens when my oldest, “the elusive cousin”, shows up:

^^^ Yes, that’s me there with my bun and sunglasses. And Matt with his glasses and baldy stubble.

If you enjoyed what you've read here, please share! It helps others find the site and spreads the goodness (which makes me so happy!)

Looking for Something Specific?

I send out periodic behind the scenes thoughts, recommendations, what’s making me happy, as well as the latest posts from reemeyer.com. As I have new resources, the reemail will be the first place to hear about what’s available, so you don’t miss a thing!

Right now when you sign up, you can download a free copy of my latest devotional: NO FEAR.

In case you missed it (recent posts)

Things I talk about…